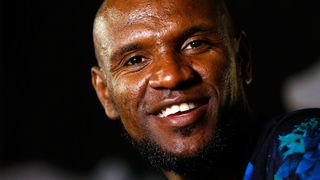 Eric Abidal believes Monaco could have the edge over Juventus in their Champions League semi-final clash because of the absence of pressure on this season's surprise package.

Leonardo Jardim's men have seen off Manchester City and Borussia Dortmund on their way to the last four and are now just a two-legged tie against the Italian giants away from June's final in Cardiff.

Former Monaco defender Abidal thinks his former club, who have profited from five goals apiece from Kylian Mbappe and Radamel Falcao during this year's competition, could benefit from heading into Wednesday's home leg as underdogs.

"These will be two huge games," Abidal told Omnisport. "Juventus are the definite favourites as they have more experience in this competition.

"But at this stage of the competition it's better to be on Monaco's side, without pressure.

"They have approached this competition from the start with hard work, young players and a strategy. That's been their strength since the start of the season.

"They must approach these matches in the right way to take advantage of this moment and maybe cause a surprise."