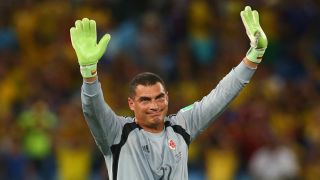 Faryd Mondragon is in a stable condition in hospital following a reported suicide attempt.

The former Philadelphia Union and Galatasaray goalkeeper was admitted to the Fundacion Valle del Lili clinic in Cali on Tuesday night and has suffered a "metabolic imbalance," with Colombian media suggesting it was the result of an attempted overdose.

Mondragon, who became the oldest player to feature at a World Cup when he came on as a substitute in Colombia's win over Japan in 2014 at age 43, posted a cryptic message on social media, which has since been deleted, hours before his admission.

"There is only me who can judge my life, and I'm tired of being judged by others without the possibility of defending myself," he wrote.

The Fundacion Valle del Lili has confirmed Mondragon is in a stable condition and remains under observation.

"Yesterday [Tuesday] night time Mr Faryd Mondragon was admitted to our institution with a metabolic imbalance," a statement read. "The patient is in good condition, under medical observation and awaiting their evolution."