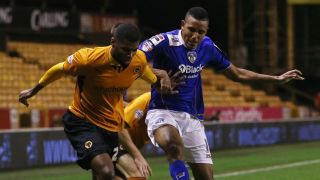 Montano was one of a number of players named by the National Crime Agency in November 2013, but he was never charged and the case was eventually dropped.

League One side Oldham courted controversy recently when they considered the prospect of signing convicted rapist Ched Evans, before a largely negative response from sponsors, fans and the general public led to them backing down.

And Montano believes it is unfair that Evans was almost given a chance, while he was dismissed.

"It has been a really tough time," the 23-year-old winger told BBC Sport.

"Now the case has been dropped it feels like the clouds have been lifted from over my head.

"It feels like the nightmare I have lived through is over.

"I felt down, upset, because I haven't been convicted of anything. There were accusations, but I was innocent.

"But then Oldham attempt to sign Ched Evans. I was down - they treated me as they did and then they go and do what they did with Ched Evans."

Montano has spent the past six months playing for the America de Cali in his native Colombia but is hopeful of a return to British football.

"I am giving my best for the team down here and hopefully, one day in the near future, I will get an opportunity back in the UK," he added.

"I would grab it with both hands. Start from where I left off."