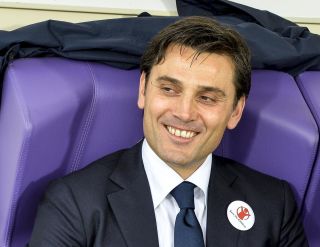 The Serie A champions took a 2-0 lead into half time on Sunday after goals from Carlos Tevez and Paul Pogba, but Montella's men stormed back to score four without reply after the interval.

Rossi pulled one back from the spot on 66 minutes and, just 15 minutes later, Fiorentina were 4-2 up as the Italian added two more before Joaquin scored his first Serie A goal.

The victory represented the Florence-based club’s first home win over Juventus since 1998, and Montella lauded the display of Rossi despite the fact he was not fully fit.

He told Sky Sport Italia: "Rossi didn't have a great game in the first half, but in football quality makes the difference. I considered replacing him, but he’s a player who can change a game even when he's not well.

"He works for the team and is not egotistical. He scored extraordinary goals and gave us the strength to win this match."

Montella's side looked doomed at half time as Juventus dominated proceedings, but in the end the manager was left describing his team's comeback as "extraordinarily wonderful".

"It is certainly among my most enjoyable victories. In the first half it was balanced and Juve made the most of our errors, especially on the second goal," he added.

"Juventus didn’t allow us spaces through the middle after the break and stopped us raising the tempo. We looked unable to score, but football is marvellous and the penalty changed the inertia of the game.

"We achieved this despite going 2-0 down, despite losing Massimo Ambrosini, despite Rossi having a back problem.

"It's tough to score four goals against Juventus, especially with Antonio Conte in charge, and extraordinarily wonderful to do it in 15 minutes.

"I thank the fans, who behaved impeccably and perhaps at times believed in this result more than we did. I am glad to note there was no crowd trouble either, despite the concerns and rivalry."