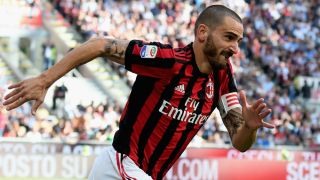 AC Milan manager Vincenzo Montella has conceded that captain Leonardo Bonucci needs to improve ahead of Sunday's clash against Roma.

The 30-year-old joined from Juventus to considerable fanfare in July but has yet to fully settle in a Milan team who have already lost two of their six Serie A games this season.

The Rossoneri sit sixth in the table, but are level on points with the visitors to San Siro, and Montella is demanding a significant improvement from Bonucci and his fellow defenders.

He said: "Bonucci is not a problem and never will be. He certainly knows he has to improve his performances and was the first to admit it, but he is a resource for Milan and will be for many years to come.

"People seem to think everything is Bonucci's fault, but I know how to get the best out of him and his playing style. We need to improve overall in defence and this is a big test, so the players will be concentrated for the full 95 minutes.

"I am determined to turn things around"Read boss 's press conference in full ahead of September 30, 2017

"The internal relations are very good and Bonucci is motivated by difficulty. I am not remotely troubled.

"Roma have a super strike force and this match will give us a chance to make it a head-to-head in the table, which in recent years it hasn't been."