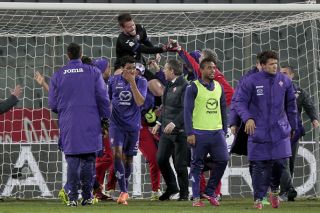 A 2-0 second-leg victory over Udinese saw the Florence-based club to a 3-2 aggregate victory, with the visitors to the Stadio Artemio Franchi finishing the match with nine men.

Montella said Udinese were worthy opponents but Fiorentina fully deserved their spot in the final as their hunger was superior, and they will face either Roma or Napoli for the silverware.

"It was a very difficult game and before celebrating Fiorentina's performance, I must compliment Udinese for their efforts over both legs. They caused us a lot of problems," Montella told Rai Sport.

"Having said that, over 180 minutes I feel it was a deserved win and we will enjoy it with our fans, patrons and the whole city. We hope it can become a big moment for Florence.

"We are growing a great deal, although there are some physical problems when playing so often. We saw great team spirit tonight and I’d say the desire was what allowed us to win even more than our technique."

Montella said Juan Guillermo Cuadrado's fate to miss the final after firing Fiorentina into the decider on 61 minutes was part and parcel of the game, as the striker picked up a yellow card in the game's dying stages that will see him suspended.

"Mario Gomez will be there for the final. He is recovering and was on the bench tonight, as we might've used him if needed for 5-10 minutes," Montella said of Cuadrado's likely replacement.

"It's a shame for Cuadrado but this is football."

Udinese coach Francesco Guidolin said his side were gallant in defeat, as they lost to 'one of the best teams in Italy'.

"Tension is understandable, as our dream was vanishing in front of our eyes. We must learn to accept these things," Guidolin told Rai Sport regarding the late dismissals to Emmanuel Agyemang-Badu and Maurizio Domizzi.

"Overall we played well and deserved to score at least a goal but if you don't then it becomes difficult. We leave with our heads held high and shake the hands of our opponents, wishing them well for the final.

"I am proud of my lads, who caused a lot of problems for what in my view is one of the best teams in Italy.

"The stadium was undoubtedly a factor too, as the atmosphere was remarkable pushing Fiorentina on.

"You can risk being humiliated against Fiorentina, but over two legs we played basically on a par with them."