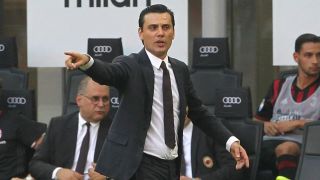 AC Milan boss Vincenzo Montella believes his players need to show more anger if they are to succeed this season.

The seven-time European champions have made an indifferent start to the Serie A season, beating Torino before losing at Napoli.

And having seen his team collect three red cards across two matches, Montella is hoping Milan can channel a controlled aggression he showed in his own playing days.

"I'm happy with the way we are working, there are some important basics missing, but we need time to bring results," he told Corriere dello Sport.

"Right now we are lacking a bit of anger that must characterize every player, in my opinion.

"When I played I always had a desire for revenge against someone, that was often the opposition or could even be my competitor for a jersey - of course, all in accordance with the rules.

"This type of anger you have to train."

And Montella has a ploy to motivate his players, saying he plans to bring to their attention any negative press that has followed the club's transfer business.

"I asked that I could have delivered all the assessments made by the newspapers related to the market," he continued.

"I'm going to show them to the people concerned. I hope it can be a good motivation.

"I am convinced that we will show to be a group that is worth much more than previously believed."

One player who has made a fine start to the campaign, though, is Carlos Bacca, netting a hat-trick in the defeat of Torino and impressing Montella against Napoli.

"Bacca is a striker of international calibre," he said. "We must exploit those characteristics.

"Against Napoli it was difficult to play centre forward, it was complicated to open Napoli's defence.

"However, he stretched their team and this has benefited [M'Baye] Niang and Suso. Bacca is always useful to the team."