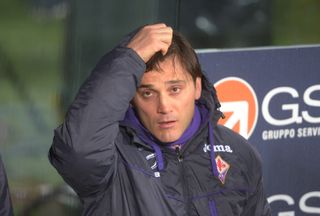 The Florence outfit booked their place in the final with a 3-2 aggregate victory over Udinese, but came agonisingly close to seeing Tuesday's second leg go to extra time deep into stoppage time.

Goalkeeper Neto made a heroic one-handed save to deny Luis Muriel and Nico Lopez failed to convert the rebound, much to the relief of Montella.

"You suffer more as a coach," he said. "You don’t suffer that much when you are a player, or even not at all, because you have the chance to take part to the game physically.

"I suffered a lot in the last minute of the game, I would hardly have accepted to let Udinese score a goal at the 96th minute of play and from a goalkeeper’s punt.

"We weren’t enough careful there and that was the hardest moment for me."

And the 39-year-old to quick to praise his goalkeeper's display late on.

"I saw great qualities in Neto," he added. "Obviously he still needs to grow and improve as a goalkeeper, but luckily for him and for Fiorentina there’s still a lot he can give.

"Sometimes life gives you immense joys, like it happened to Neto tonight, making him the star of the night in such a special night for Fiorentina and for us all, and he well deserved that."

Fiorentina now face a final against either Roma or Napoli, who meet on Wednesday, with the men from the capital holding a 3-2 advantage from the first leg.