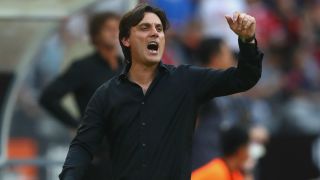 AC Milan head coach Vincenzo Montella has vowed to lead the club through what he accepts is "a difficult time".

A 2-0 Serie A defeat to Sampdoria on Sunday, just four games on from a 4-1 thrashing by Lazio in Rome, has led to speculation over the former striker's future at San Siro.

Montella is believed to have met with club bosses on Monday and later confirmed he had dismissed fitness coach Emanuele Marra as the first step towards improving his side's fortunes.

The 43-year-old says he feels the support of his superiors and is determined to show he is the right man for the job.

"I want to show my passion here," he told a news conference on Wednesday. [Director] Massimo Mirabelli and [CEO] Marco Fassone have supported me.

"It's a difficult time for us but I can bounce back from this. It's a step towards growing for the future.

"I've given a lot of things some thought but I'm coaching an amazing team and I have the energy to keep coaching Milan."

"We're aware we have to create a winning mentality and we have to do it fast" Watch Coach Montella's interview with  September 25, 2017

Marra's sacking came as a shock, with the coach having worked alongside Montella at Fiorentina and Sampdoria before joining the Milan staff.

Montella says it was a "painful decision" but felt compelled to act as the two no longer agreed on the best course of action.

"I can't say more than I have already," said Montella, who confirmed via Twitter this week that Marra had not been in agreement with his plans for a new fitness programme for the squad.

"If there is no longer the same vision, then separation becomes inevitable.

"He wasn’t the problem but we had some differences and I didn't feel I had his support any longer.

"It was a painful decision but I wish him all the best. There was no longer complete harmony between us."

Milan host Rijeka in the Europa League on Thursday.