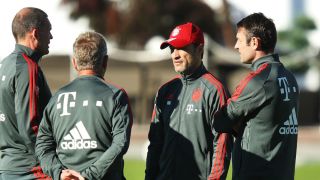 After winning the opening seven games of his Bayern tenure, Kovac has seen his side stumble in the league and Europe.

Defeats to Hertha Berlin and Borussia Monchengladbach followed a draw with Augsburg to leave Bayern sixth in the table ahead of Saturday's trip to Wolfsburg.

A 1-1 draw with Ajax in the Champions League means Bayern have failed to win in their last four matches in all competitions, leaving Kovac under pressure amid speculation he could be replaced by Arsene Wenger.

The 47-year-old is not pressing the panic button yet, though, and is confident all is well within the Bayern camp.

"The fact is, the results are not right," he told a media conference. "In the first games, the number of scoring chances was the same as in the last four. The problem is that they were not converted.

: "It will be a very interesting and high-intensity game in Wolfsburg. Our recent matches obviously haven't gone as we had hoped."October 19, 2018

"It was a good approach, but ball did not want to go in. We will not question everything and turn everything. We need that little bit of luck.

"The mood is positive. We also want and have to be positive. The passion is there.

"Life consists of failure and success. I can assure you that we have trained really well. Everyone desperately wants to play and win."

The trio are expected to give Kovac their backing at the hastily arranged news conference.