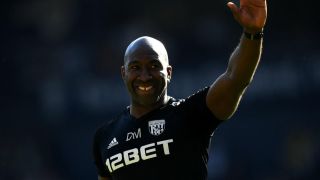 Since replacing the sacked Alan Pardew at the beginning of last month, Moore has overseen two draws and three victories in five matches at the helm.

The streak includes wins away to Manchester United and at home against Tottenham, either side of a late comeback to snatch a 2-2 draw with Liverpool.

It means the seemingly doomed West Midlands club still have faint hopes of avoiding relegation, although their demotion to the Championship will be confirmed on Tuesday, unless fellow strugglers Swansea City and Southampton play out a draw at the Liberty Stadium.

"I am really delighted," Moore told the Premier League's official website. "It's been a wonderful joint-effort by everybody here.

"We've just brought some unity here and it's helped the players put the performances together on the pitch."

8 - Darren Moore picked up eight points from four games during April - as many as West Brom registered in their previous 18 games. Saviour?May 8, 2018

West Brom travel to Crystal Palace for their final match of the campaign on Sunday.