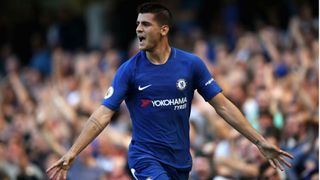 Chelsea striker Alvaro Morata sees no reason why he will not be able to reach the Champions League final with a third different club this season having done so with Juventus and Real Madrid in recent years.

Morata has enjoyed a strong start to life in the Premier League, scoring three times and setting up another two goals in his four appearances, suggesting he is likely to be a key player for the club this term.

Chelsea are back in the Champions League after failing to secure a place in Europe for 2016-17, a campaign in which Morata won the continent's premier competition, appearing as a late substitute for eventual winners Madrid in the 4-1 final victory over Juve.

He also played and scored in the final of the 2014-15 edition when he was on the losing side for Juve against Barcelona, and he is hoping for Chelsea to be in contention for the title in Kiev next May.

"With all the teams I've played for in the Champions League, I have reached the final and I hope to do so this year too.

"It's very difficult to win the Champions League, but I think we have a good team, and with a good mentality we can do good things."

In all five of the goals Morata has been involved in, the Spaniard has used his head.

Now he is hoping to show off the finishing skills he possesses with his feet, while he also discussed how defences in the Premier League compare to those in Serie A and LaLiga ahead of Sunday's clash with Arsenal.

"At the moment, I've only scored and assisted with my head for Chelsea, so I hope to use my feet as well soon," he added.

"But it's true that English football is different to Italy and Spain. You don't have much time to calm down, or relax, because all the time the ball is on fire.

"You need to be in good condition to play here and approach every match with a good mentality.

"In terms of the marking, it is probably the same here as in Italy with the teams that are maybe not at the top of the league – those teams are compact and it's hard for us sometimes to break them down.

"But when the other team wants to play with the ball, you can find space. That's when you find the spaces to attack the other team."