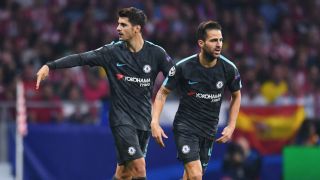 Perhaps even more remarkable than a midfield collective boasting the creative talents of Andres Iniesta, David Silva, Isco, Saul Niguez, Koke and Marco Asensio was the list of players Lopetegui could afford to leave behind.

Chelsea striker Alvaro Morata was the headline omission following a disappointing maiden Premier League campaign – he was not the only disappointed Spaniard at Stamford Bridge – but plenty of players other nations would delight in being able to call up will also watch Russia 2018 from afar.

Here is our selected XI from the players La Roja are happy to do without. We also managed to put a strong bench together.

Asenjo enjoyed an impressive campaign despite being sidelined through injury until the end of November, not least when he saved two penalties in the same 1-0 win over Getafe. Nevertheless, the former Atletico Madrid man's two-year wait for a second international cap goes on.

Equally adept on the right-hand side of defence or across the midfield, Barcelona utility man Roberto played 30 times in his club's LaLiga triumph. Dani Carvajal and Cesar Azpilicueta mean Lopetegui is well covered here, however, with Arsenal's Hector Bellerin also missing out.

Former Barcelona youngster Bartra helped Real Betis to an impressive sixth-place finish in LaLiga after returning to Spain from Borussia Dortmund in January. The 27-year-old made the squad for both the 2014 World Cup and Euro 2016.

An accomplished performer who has largely managed to put debilitating injury woes behind him this season, Martinez was mainly deployed in defensive midfield by Bayern boss Jupp Heynckes. He could also have covered Sergio Busquets in that regard.

One of the players to proceed seemingly unaffected by Chelsea's underwhelming Premier League title defence, Alonso made his international debut in March and presents a genuine goal threat. He scored seven times this term but Nacho Monreal's greater familiarity with the setup appears to have held sway.

Jose Mourinho dishing out specific shackling briefs to Herrera in big games means the ex-Athletic Bilbao man is sometimes unable to call upon the full array of his talents, but United's better performances have generally come with the 28-year-old to the fore.

Not a surprise omission, given Fabregas last featured at Euro 2016 and has observed all of Lopetegui's tenure from afar. Nevertheless, it is still galling to see a cap centurion of his sublime gifts missing the final World Cup of his peak years.

The creative inspiration behind Valencia's superb fourth-place finish and return to the Champions League, Parejo scored seven times and supplied as many assists in LaLiga. Even that was not enough to break into a squad absurdly blessed with brilliant playmakers.

7 - Dani Parejo has provided seven assists in La Liga this season, the most in a single league season in his professional career (alongside 16/17). Roja March 17, 2018

Ex-Real Madrid forward Callejon has excelled this season alongside Dries Mertens and Lorenzo Insigne in one of Europe's most exciting attacks, contributing 10 goals to Napoli's title Serie A tilt. He was unable to impress Lopetegui in a friendly appearance against Russia last November.

Atletico Madrid's player registration ban meant Vitolo had to spend the first half of this season on loan with struggling Las Palmas after leaving Sevilla. The winger has struggled to nail down a starting spot with Diego Simeone's men, although four goals in five qualifiers might have been expected to get him on the plane.

An unforeseeable state of affairs when Morata left Real Madrid to become Chelsea's record signing last year, or even at the midway point of the Premier League season. A solitary top-flight goal in 2018 means the man he failed to adequately replace at Stamford Bridge, Diego Costa, heads to the World Cup in his place.