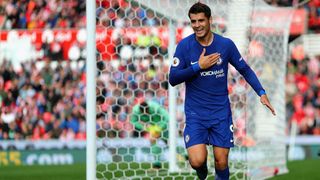 Chelsea forward Alvaro Morata has hinted that he is targeting a return after the international break, despite initial reports he could miss six weeks through injury.

The Spain international suffered damage to his left hamstring in the Blues' 1-0 Premier League defeat to Manchester City on Saturday, ruling him out of action with the national team for their final round of World Cup qualifiers against Albania and Israel.

But Morata has taken to Instagram to encourage Chelsea fans that he is battling back, posting a picture of himself giving a thumbs-up gesture along with a caption that reads: "‪I have no time to lose. Working hard towards recovery."

Morata had earlier included a target emoji and "Crystal Palace" in his post, before deleting mention of Chelsea's next leagues fixture.

Morata has scored seven goals in nine games in all competitions since joining Chelsea from Real Madrid in the off-season.