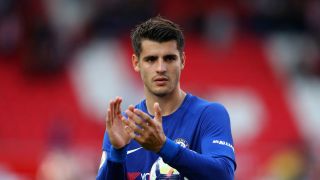 Alvaro Morata is revelling in the responsibility of being Chelsea's main man, with boss Antonio Conte hailing a "complete player".

A day on from the Premier League champions drawing a line under the Diego Costa saga by sanctioning the striker's return to Atletico Madrid, their latest goalscoring hero came to the party at Stoke City.

Spain international Morata left the bet365 Stadium with the matchball after a hat-trick in a commanding 4-0 win, taking his tally since joining from Real Madrid as Chelsea's record signing to six in as many top-flight games.

Conte pointed out that the former Juventus man has a new situation to adjust to this season given, for all his obvious prowess, he has never been an undisputedly first-choice striker at club level before now.

"Alvaro don't forget, in his previous experience, didn't play a lot at Juventus or at Real Madrid," Conte told reporters. "Now he has a great chance to show that he is a really good striker, a fantastic striker. He is very young, only 24-years-old.

"I think this is very important for Chelsea. I think now he is involved in our style of football, in our ideas, he is very strong because you could see against Stoke that he made a lot of contact with the defenders. I think he is showing that he is a really complete player."

Morata's adaptation to a more physical and relentless style of football in England has also impressed Conte.

"This league is not easy, especially for the striker," he explained. "During the game there's a lot of contact, you must be prepared for this type of contact. Also the referees don't waste time a lot. I think it is good for the game.

"He adapted very well to this league, now he needs to continue to work because he has only just started down this path."

Chelsea have a tough week ahead of them, with Wednesday's trip to take on Atletico Madrid in the Champions League followed by Premier League pacesetters Manchester City coming to Stamford Bridge.

Intrigue will surround Eden Hazard's involvement in these crunch clashes.

The Belgium playmaker made his third Premier League substitute appearance of the season at Stoke, following his recovery from a broken ankle, having completed 90 minutes in the 5-1 EFL Cup win over Nottingham Forest.

"If I make this decision [to start Hazard at Atletico] it is because I am comfortable with this decision. You must know that when you are in a great team, there are many players, you must be ready to play, to start," Conte explained.

"Also, be ready to be on the bench and come in and make the difference, like he did [at Stoke]. I don't see any problem [with Hazard on the bench].

"We are managing the recovery well. As you know, Hazard is very important for us. Now it is important to be sure that he is ready to play for the whole game."