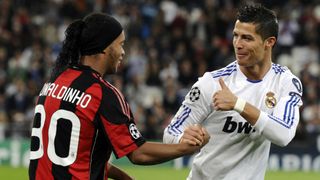 Brazil great Ronaldinho congratulated Cristiano Ronaldo on winning the Ballon d'Or after the Real Madrid star claimed the award for a fourth time.

It capped a glittering 12 months for Ronaldo with club and country, guiding Madrid to Champions League glory while helping Portugal win Euro 2016.

"Great achievements with club and the national team in recent years are the way to your success!"

Ronaldo scored 51 goals in all competitions for Madrid last season, while he netted three at the European Championship in France.

This term, Ronaldo has 10 LaLiga goals as Madrid top the domestic standings.