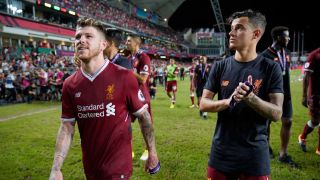 Alberto Moreno is delighted by Philippe Coutinho's continued stay at Anfield, believing it represents a boost to everyone at Liverpool.

Coutinho had been the subject of interest from Barcelona in the transfer window, but the Reds refused to sell the Brazil international and he is back in training with Jurgen Klopp's side.

While Liverpool had made a fine start to the season prior to Saturday's defeat at Manchester City with 10 men, Moreno sees Coutinho's presence at Anfield as key.

"It is great news," he told Mundo Deportivo. "Keeping someone of the stature of Coutinho benefits everyone, the club and the city. He is one of the best players I have played with.

"I do not like to go into details [of Coutinho's failed move to Barcelona]. He is a close friend of mine and he tells me everything, but it's better to ask him."

Moreno largely served as a back-up to James Milner at left-back last season, but he has featured more this term - even if he does not know why he was initially dropped.

"I still do not know what happened," he said. "I was still the same player, I worked with the same intensity, but the decisions are taken by the coach.

"He opted for Milner, the team was winning the games and we did not compete in European competition, so we did not need so many rotations.

"I prefer to focus on the present."