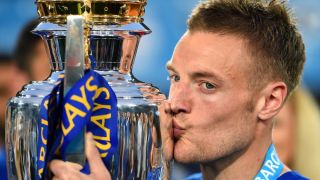 Leicester City captain Wes Morgan insists Jamie Vardy had no reason to leave the club after being linked to Arsenal.

Morgan, who has also re-signed, said Vardy made the right decision and believes the 29-year-old can get even better.

"It's to be expected that teams are going to be interested in him, but he has committed himself to Leicester now and it's great for the fans, the players and the club," he said, via the Mirror.

"He has proved himself on the big stage and, no doubt, he can do that again because he's much more confident now. Even on the ­international stage with England, he has been a threat straight away.

"And, at Leicester, he's proved himself. We are the defending champions – there's no reason for him to leave."

Morgan feels Vardy is ready to shine at an even higher level in the Champions League.

But the Jamaica international warned his club team-mate that opponents would put even more work into him after his 24 league goals last season.

Morgan said: "I'm sure teams will do their research and know about him – he's a household name now, isn't he? So, teams will try to nullify his threat.

"But plenty of defenders have tried and failed so far. I'm just looking forward to seeing what he can do."

While Vardy and Morgan have stayed, Leicester have seen N'Golo Kante leave for Chelsea and Riyad Mahrez still be linked with a move away.