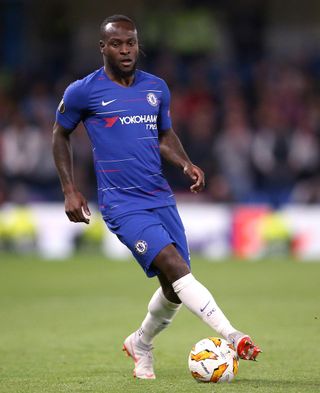 Victor Moses has joined Inter Milan from Chelsea on loan with an option to buy, the Italian club announced on Thursday.

Wing-back Moses had been on loan at Turkish club Fenerbahce, featuring 22 times before injury sidelined since the end of November.

Moses will now look to kickstart his career in Serie A alongside Manchester United defender Ashley Young and former Blues striker Romelu Lukaku, who had posted photo of the team at dinner on Wednesday which included their latest recruit.

“It’s an honour for me to be here and be an Inter player. I’d like to thank everyone for the welcome I’ve been given, I can’t wait to start,” Moses said on Inter TV.

Moses is looking forward to renewing his relationship with Conte, having won the 2016-17 Premier League title together at Stamford Bridge as well as the FA Cup.

“Having the opportunity to work with the coach again is something I’m really happy about,” said Moses.

“I have spoken to him and he has already explained the club’s project to me. I want to be part of it, I’m happy to be here.

“I’ll give my all and want to help the team. There’s a lot of quality here, I want to make my contribution out on the pitch and enjoy myself. That’s the most important thing.”

Chelsea’s club statement, meanwhile, made no reference to any potential permanent deal.

“Victor Moses will spend the remainder of the 2019/20 season on loan at Inter Milan having returned to Chelsea from his temporary spell in Turkey with Fenerbahce,” the Premier League club said.

Moses – who also had loan spells in England at Liverpool, Stoke, and West Ham – joins an Inter team which is currently second in Serie A, just two points behind leaders Juventus.