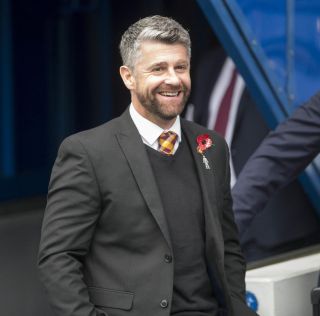 Hartley lost his place after Robinson moved to a flat back from a five but headed home Motherwell’s second goal in a 2-0 Betfred Cup win at Dumbarton after Charles Dunne was rested.

Robinson said: “Peter is fighting for a place with Charles who is an exceptional footballer at times and one of the best athletes I have worked with.

“Peter has shown a tremendous attitude, as I would expect from the club captain.

“He’s been a leader to everyone around him. He has played here and done very well.”

Motherwell took 42 minutes to break their hosts down in difficult conditions, with Christian Ilic curling home.

Robinson said: “Dumbarton made life difficult, they sit in, credit to Jim (Duffy), he had them very well organised.

“The pitch made it more difficult than it should have been. It was like playing in the rough at Royal Portrush.

“But if I’m Jim I’d do exactly the same thing, I can’t blame him in any shape or form. And we had to find solutions to that. What pleased me most was our work rate.”

Duffy played down the length of the grass.

“The grass was a wee bit long but it wasn’t up to your ankles,” he said.

“I don’t think Motherwell will be complaining about the pitch. That was pristine in comparison to Fir Park for a few years.

“The groundsman cut it on Sunday but I wasn’t going to make it a bowling green. I’d need to be daft to do that. Motherwell are quick enough and good enough without having it as slick as could be.

“It was dry, it was sticky. We made it difficult for Motherwell because we worked hard.”