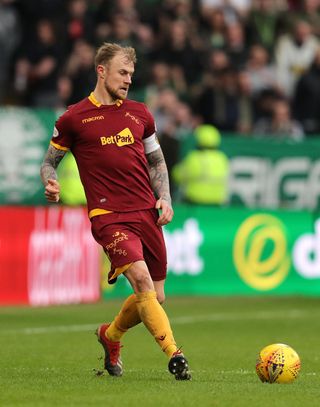 Motherwell kept their faint hopes of a top-six finish in the Ladbrokes Premiership alive with a deserved 3-0 win against St Johnstone.

Matthew Kennedy weaved down the left before his cross was deflected into the path of Chris Kane who attempted to control the ball but went down under the faintest touch from Alex Gorrin and Euan Anderson pointed to the spot.

There was a slight delay as incensed Motherwell players remonstrated with Anderson before Liam Craig stepped up and struck a tame left-footed penalty that was easily stopped by Mark Gillespie.

The hosts controlled possession in the opening stages with Turnbull increasingly prominent and on 15 minutes his corner was narrowly headed over the bar by Tom Aldred.

The home support were irate when Murray Davidson escaped a caution for a studs-up tackle on Allan Campbell but he was deservedly shown yellow minutes later for a foul on Gorrin.

The visitors looked most dangerous through the cultured left foot of Sean Goss. The on-loan Queens Park Rangers midfielder’s pinpoint free-kick was headed across goal by Jason Kerr but Kane acrobatically fired over the bar from just a few yards out.

Jake Hastie has been strongly linked with a summer move to Rangers this week but he was anonymous throughout and replaced by the returning Chris Cadden just after the hour.

The 22-year-old academy graduate made an immediate impact surging down the right before playing a glorious pass through to Turnbull but he dwelled too long and his shot was deflected to safety.

Motherwell were dominant throughout and came close to doubling their lead when captain Tait curled an effort off the bar on 76 minutes with Clark stranded.

The hosts did not have to wait long for the second goal scored by the prodigiously talented Turnbull on 80 minutes. Campbell fed the Scotland Under-21 international who majestically dummied his way past a defender before firing low across Clark.

‘Well captain Tait rounded off an excellent afternoon when he curled home a brilliant third goal in stoppage time to the delight of the home support.