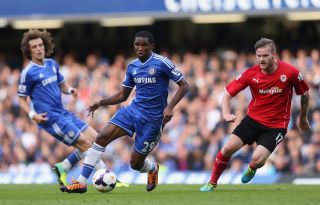 Eto'o broke his duck for Chelsea during Saturday’s 4-1 Premier League victory over Cardiff.

And Mourinho is confident there is more to come from the Cameroon forward as he adjusts to life in England.

Speaking ahead of Chelsea's UEFA Champions League match against Schalke on Tuesday, Mourinho said: "Cardiff was good for him, not just for the goal but for his contribution.

"His movement was very good; in the first half when Cardiff was compact and closed he was the one in attacking positions with better movement and participation.

"It's the goal that gives him the confidence, the extra motivation he needs, so normally now he is happier. He's a very good player.

"He needs time, because in his career he played in Spain and Italy, a little bit in Russia, countries and championships different from the Premier League.

"Since the first day, he made an impact with the players. Everybody sees the fantastic quality he has in a little bit of time."

Schalke have taken maximum points from their first two Champions League fixtures, and Mourinho believes the German side are Chelsea’s strongest opponent in Group E.

"It's a good team, a good opponent, and hopefully we can be better than them," added the Portuguese.

"We play now two matches against the strongest opponent in the group, and need points over these two matches. That's obvious.

"We have a game and we want to win and are going to try to win."