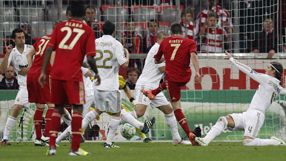 "I don't criticise the referee, I accept his decisions," Mourinho, who has a reputation for doing exactly the opposite, told reporters.

"They scored a goal which should have been disallowed but that doesn't give me any reason to criticise.

"A draw would have been a fairer result. This is football, whoever scores wins and the game ends when it ends, nothing else."

"It's not a terrible result," he added after Bayern snatched a win with a last-minute goal.

"We wanted to win, you start to feel it's going to be difficult, the two teams were tired, there was a lot of fighting for the ball and when it seemed it would be a draw, they scored."

Although it was a fractious encounter, Bayern's 66-year-old coach Jupp Heynckes thought it used to be worse in the old days.

"It's the semi-final of the Champions League, so it was always going to be a physical match and both teams showed that," he said.

"When I think of the old European Cup, especially against Italian teams, those were hard fights back then, often very difficult.

"I think the referee, apart from a few incidents, had a good game."