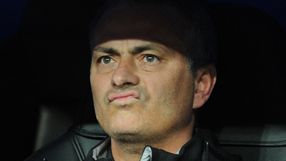 The nine-times European champions had been convinced they were going to reach the final, buoyed by their 2-1 La Liga win at Barcelona on Saturday, and by their arch-rivals' shock defeat to Chelsea on Tuesday.

With the league title all but in the bag, seven points clear with four left to play, Mourinho in only his second season at the helm looked like he had it within his grasp to also steal Barca's European crown too.

"There was no luck," Mourinho said with a resigned smile. "It's difficult to reach two semis in two years and not make the final. We deserved to win.

"I remember a [Champions League] semi-final against Liverpool which was exactly the same where we had to play a game to compete in another championship before, and they didn't have that pressure, and we lost.

"It was the same here. We played with everyone on the weekend and our opponents didn't.

"Apart from freshness, the team played great though. These players aren't supermen, that is just a film. The players went to their very limits," he added after having knelt on the touchline as if he was praying while he watched his players take penalties.

"Barca played a derby and two days later they were knocked out. It isn't easy. That's why you have to really value teams who win doubles or trebles."

Mourinho seemed to end the speculation that he might leave Madrid at the end of the campaign, when asked about his future, even though he still has two years left on his four-year deal at the Bernabeu.

"If we continue with this empathy, this club and this team has margin to improve and grow," the Portuguese said.

"If the club and the players think I and they can keep bringing something to this. I will continue."

Deprived of a meeting with his former club Chelsea in Munich, he was clear about who he hoped would win.

"John Terry is missing but Chelsea are there. I hope it is a good final. I want the Blues to win but I respect Reds," Mourinho said, as he praised their battling display with ten men at the Nou Camp.

And he ended with a dig at Pep Guardiola's side.

"Chelsea were heroes yesterday," he added. "Some people think they are masters of the game, and look down on teams like them or Inter but they know nothing about things such as effort and character.

"Chelsea deserve to be there in the final and so do Bayern."