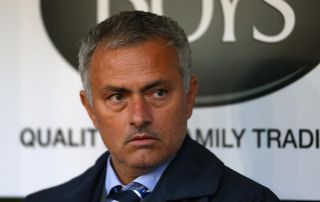 The Portuguese is blessed with arguably the strongest squad in the Premier League, but admitted on Friday that it can be difficult to keep all his players happy in the early weeks of the season with just one game per week.

Next month will see Chelsea enter the UEFA Champions League as well as the League Cup, meaning a significant increase in their workload.

That should give Mourinho the chance to give game time to a greater number of his squad, but for now, the Chelsea manager explained that those not being selected should keep the good of the club in mind.

Mourinho used Petr Cech - ousted from his regular number one spot by Thibaut Courtois - as a shining example of the attitude he desires.

"Petr is a top professional, he's been working as always," he said in a press conference. "His behaviour has been fantastic.

"If you win, it's easier because victory brings happiness to everyone, not just the ones on the pitch.

"If you play one match a week [it's difficult] but when you play three a week everything is easier because then they play.

"Football players like to play but this period is the most difficult. The club is the most important thing.

"For me, football is about the club, [then] the team, the players, the manager - so I am the last one.

"We cannot put players in front of the team or the club. If you can make it good for all, that's the perfect situation."

For the second game in succession, Chelsea take on a newly-promoted side, following up Monday's 3-1 win over Burnley with the visit of Leicester City on Saturday.

Despite a seemingly straightforward start to the season, Mourinho is wary of the threat posed by Nigel Pearson's men.

"It's difficult," he said. "They are champions, and they come with that winning mentality.

"They come with high expectations and high motivation to play in the Premier League. They know every point is important, especially for the teams that fight to keep in the division.

"They had a difficult start and managed to come from behind and equalise and they gave Everton a good game. They come to us I don't think it will be different."