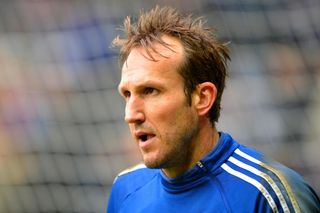 The 42-year-old has fallen to third in the pecking order since Thibaut Courtois has established himself as Mourinho's first choice, with Petr Cech preferred as reserve option.

Speculation had begun to mount that Schwarzer would be on his way to Leicester, who have recently been shorn of the services of number one Kasper Schmeichel due to a broken metatarsal.

Ben Hamer has played in the Dane's absence and Schwarzer will add to manager Nigel Pearson's goalkeeping options at the King Power Stadium.

Mourinho confirmed the news following his side's 3-0 victory over Watford in the FA Cup third round at Stamford Bridge on Sunday.

After a frustrating first half that ended goalless, Chelsea made the breakthrough shortly before the hour through Willian's sublime finish, before further goals from Loic Remy and Kurt Zouma wrapped up the win.

Mourinho introduced both Willian and Diego Costa at the break, and the Portuguese was pleased with the impact his substitutes had on proceedings.

"It was difficult. In the first half we didn't play well and Watford were well-organised defensively," he told the BBC.

"The second half was different, we gave a different dynamic to the game. We created and we deserve to win.

"I don't need to be angry to try to change things. I did the changes that I thought could help me change the dynamic of the game.

"Diego Costa and Willian played very well and in the second half the team followed them.

"If I don't have on the bench players which can help me change the game, probably I don't win.