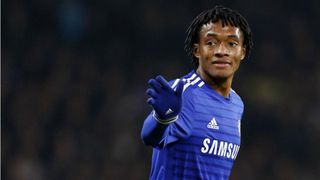 The Colombia international completed a deadline-day move to Stamford Bridge from Serie A earlier this month, signing a four-and-a-half-year deal.

Saturday's 1-1 draw with Burnley saw Cuadrado make his fourth appearance in all competitions, and Mourinho is willing to be patient as he waits for the 26-year-old to hit top form.

"He is adapting," said the Chelsea boss. "He needs to adapt in everything.

"The pace of the game, in Italy it's completely different, the intensity is much higher [here], it is different to play at the intensity we play – especially for 90 minutes.

"At Fiorentina he was playing as a wide player, here he has to go to areas where he's not adapted to it.

"I truly believe we are not seeing the player we know we have because the kid needs to adapt."

Cuadrado's performances for Fiorentina over the past two-and-a-half seasons brought him to the attention of Europe's top clubs, with his impact for Colombia at the World Cup speeding up his departure from Italy.