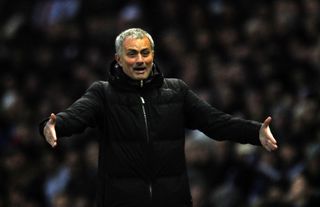 Ramires became the second Chelsea player in as many games to be cautioned for simulation when he was handed a yellow card by referee Andre Marriner during a 2-0 FA Cup win over Derby County on Sunday.

Fellow Brazilian Oscar received the same punishment from Martin Atkinson against Southampton in the Premier League on New Year's Day, and while Mourinho backs calls to stop diving in the English game he believes there could be repercussions in European competition.

The 50-year-old insists his players are not divers, but refused to criticise the referees for their decisions.

"I maintain it (Chelsea players do not dive), they (the incidents involving Ramires and Oscar) are isolated episodes," Mourinho said after Chelsea's win at Pride Park.

"This time I didn't watch on TV but (referee Andre) Marriner was so close, so if he made that decision it is because he is right.

"The last time (on) Oscar just was completely correct; this time I didn't speak yet with Ramires but if the referee was there then perfect.

"The reason (the two players were booked) was the referees were very good. In other clubs there are divers and they are not booked; we had two of the best referees in the country and in Europe.

"I don't know (if others encourage diving) - we do the opposite, but I am worried about the European competitions.

"The referees are attacking it (diving); the managers supporting the referees; we are doing well; let's see if the others (countries) do the same as us."