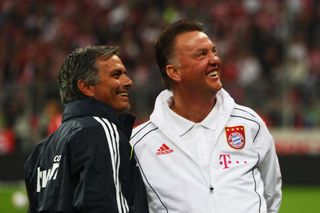 After widespread speculation, it was confirmed that Van Gaal would be the permanent successor to David Moyes at Old Trafford.

Ryan Giggs has retired from playing to become Van Gall's assistant manager - having led the club on an interim basis at the end of the season.

And Chelsea boss Mourinho, who worked with Van Gaal at Barcelona, was delighted with the news that his former colleague would become an adversary in next year's Premier League campaign.

Both clubs will be out to improve on this year's league finishes, after Chelsea ended third behind Manchester City and Liverpool, while United failed to qualify for Europe altogether, finishing seventh - their worst placing since coming 13th in 1990.

"He is a great football manager and I am happy he joins me in the same country and the Premier League," Mourinho said.

"But more important than that, he's a great guy, a great man and I wish him well."

Perhaps the greatest achievement of Mourinho's career - his treble with Inter in 2010 - was capped by a 2-0 victory over Van Gaal's Bayern Munich in the UEFA Champions League final.