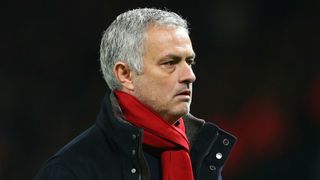 Jose Mourinho insists he does not like to row with opposing managers, despite his well-publicised feud with Chelsea boss Antonio Conte.

The Manchester United manager has traded barbs with the Italian over recent weeks, with Conte claiming Mourinho was suffering from amnesia after the Portuguese branded some of his contemporaries – without naming any individuals – "clowns" for their antics on the touchline.

Unimpressed, Mourinho responded with a dig relating to the four-month ban the Italian served for failing to report alleged match fixing – which he was later acquitted of – while at Siena in 2011. Conte retaliated by referring to his counterpart as a "little man".

Mourinho has experessed a desire for the feud to come to an end and, asked if he enjoyed such exchanges, he replied: "I don't.

"When I start them I take the responsibilities of that and I've started them many times.

"When I don't start them it's quite funny for me to see people on the other side acting like victims when they're not the victims.

Referencing previous rows with Claudio Ranieri in which he labelled his predecessor at Chelsea "old" and mocked him for what Mourinho perceived as poor English, the former Inter and Real Madrid coach added: "In my case when I think it's my fault and realise I should behave in a different way I'm the first one to apologise, like I did with Ranieri when I had the chance.

"That's why our relations went from bad to good and from good to very good because I was man enough to apologise."