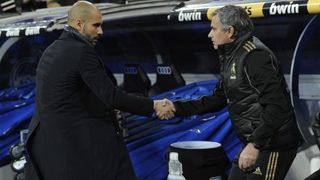 Jose Mourinho will not let his personal duel with Pep Guardiola escalate in Manchester next season as he fears that would hand the initiative to one of their title rivals.

The pair's simmering feud exploded prior to the 2011 Champions League semi-final when Guardiola hit out at the Portuguese's media persona. Four months later Mourinho poked Guardiola's assistant Tito Vilanova in the eye, sparking a melee between the players and coaching staff.

Despite the history of acrimony, Mourinho insisted he will not instigate more rivalry when he starts work at Old Trafford.

Speaking at Lisbon University, Mourinho said: "My experience does not allow me to be innocent.

"I was with Guardiola for two years in a league where either he or I would be the champion. Here, if I focus on him or he on me, the champion will be another (manager)."

Mourinho has been linked with a move for Sporting Lisbon midfielder Joao Mario but insists he has no intention of prising players from Portuguese clubs.

"I will not take anyone from here," he added.