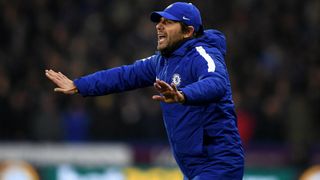 Chelsea manager Antonio Conte suggested Jose Mourinho could be suffering from amnesia after the Manchester United boss launched a barb at the Italian over his touchline behaviour.

Speaking to the media on Thursday, Mourinho told reporters he acts in a "mature" manner, rather than "crazy" or like "a clown" on the touchline - an apparent dig at Conte and Liverpool's Jurgen Klopp.

And Conte took the bait in extraordinary fashion in Friday's pre-match news conference ahead of the Blues' FA Cup tie at Norwich City on Saturday.

Seemingly searching for the right words in English, Conte used the term "demenza senile" in his native tongue when referring to Mourinho.

The literal translation is "senile dementia", but Chelsea moved to clarify that Conte had been searching for the Italian word for amnesia.

"Maybe sometimes, I think that someone forgets what they said in the past or his behaviour and sometimes I think there is, I don't know the name, 'demenza senile' when you are a bit... when you forget what you do in the past."