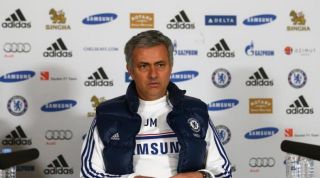 Mourinho has an embarrassment of riches at his disposal heading into the club's Premier League opener at Burnley on Monday, with the Chelsea squad bolstered during the close-season.

Big-money signings Diego Costa and Cesc Fabregas have arrived and Mourinho's man-management skills will be tested in 2014-15 as he attempts to keep every member of his squad happy.

And the Portuguese insists it is a challenge he will relish as he plans to chop and change his starting XI.

"You play 60 matches a season and you cannot play with the same players every time," Mourinho the club's official website.

"In the first three weeks you have one match per week but after that the cups start, the Champions League, internationals, so you have to rotate players.

"Everybody will have a chance, nobody will feel as though they are first choice or second choice.

"For example, in midfield we have [John Obi] Mikel, [Nemanja] Matic, Ramires, Fabregas and [Marco] Van Ginkel, so everybody will play and will feel useful, important."