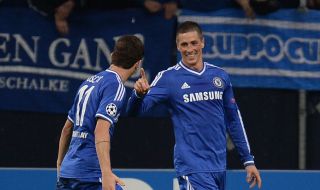 The Spain international scored twice in Gelsenkirchen in his 100th start for the London club as they went joint top of Group E and consigned their opponents to their heaviest home defeat in Europe's premier club competition on Tuesday.

Samuel Eto'o dropped to the bench as Torres was given the nod to start and the Spaniard seized his chance by taking his tally to five goals in his last five Champions League games before Eden Hazard added a third goal.

Torres has come in for plenty of criticism since moving to Stamford Bridge in a big-money deal from Liverpool, but Mourinho has been impressed with his work ethic.

The Portuguese told Sky Sports: "Sam (Eto'o) played well in the last game and Fernando also did today. I prefer to say we have strikers who work for the team and can score goals. Them and Demba (Ba) have enough quality to play for us.

"He's (Torres) a hard worker, he's not the kind of guy to hide behind the fee paid for him. He's had some not so good times since he came here, but he always kept his professionalism and since I arrived he's always positive.

"Sometimes not playing so well, but always trying hard."

Chelsea have responded to their shock home defeat to Basle in their opening Group E game by hammering seven goals in two away fixtures against Steaua Bucharest and Schalke without conceding.

And Mourinho is determined to ensure his side maintain their momentum and finish top of the group.

The former Real Madrid manager said: "I told them after the first game, 'You have garbage, clean it.'

"We did it in the best possible way - two away wins, six points and leading the group.

"We now have two matches at home. We are in a good position to qualify and we want to finish top of the group."