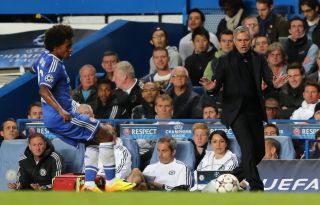 However, late goals from Mohamed Salah and Marco Streller turned the game on its head and condemned Chelsea to a first home defeat in the group stage since October 2003.

It was hardly the result that Mourinho was looking for, six years to the day after a 1-1 draw with Rosenborg that represented the final game of his previous spell in charge of the club.

Chelsea owner Roman Abramovich reportedly entered the home dressing room after the final whistle, yet Mourinho appeared relaxed when speaking to the media.

"Of course we are not happy but football in easy moments is good fun and easy for everybody. In the difficult moments is when you see the man and the character and the personality," Mourinho told Sky Sports.

"In the bad moments, I want everyone to keep calm and let me be responsible.

"I'm not in shock because I know football is a game and the reality is that sometimes you don't win.

"I'm not happy, of course, with the result but I think they (Basel) played well. They scored the equaliser in our best moment and after that we were punished at a corner where we are strong and work hard."

"I think in the first half we were in control," said Cahill.

"We went in 1-0 up and had good control of the game. We knew we could go up a level but we didn't do that and that's what has cost us. We didn't quite step it up and paid a price."