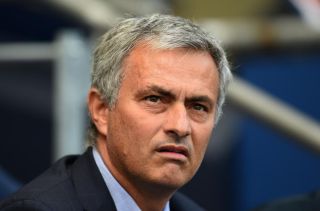 The 25-year-old struggled for fitness towards the back end of last season with Atletico Madrid, and looked far from his best at the World Cup with Spain.

Since arriving at Stamford Bridge, Costa has been held back by Mourinho, starting only in the Premier League, with one brief substitute's appearance in the UEFA Champions League against Schalke.

Ahead of Saturday's clash with Aston Villa, with a trip to Sporting Lisbon to follow on Tuesday, Mourinho stated that Chelsea would closely monitor the situation going forward.

"He plays tomorrow and he starts the game without problems," said Mourinho of Costa in a press conference on Friday.

"The question is always the same, can he finish the game and be in condition to play in Lisbon 48 hours later?

"It is a question that in this moment I don't know because I don't think about Sporting and the Champions League, I think about Aston Villa and the Premier League.

Mourinho once again refused to be drawn on Manuel Pellegrini's jibes about Chelsea's tactics in a 1-1 draw at Manchester City last weekend.

"I don't have a reaction," he said. "Because not once or two or three times he said he didn't speak about referees and then killed [criticised] [Mark] Clattenburg.

"He said he didn't speak about me or my team and opponents, so I think it's for you to comment. When I said I don't want to speak about him that's what I try to do.

"If you want a story you have to speak with him not me. I keep my place, I follow my line, I don't want to discuss any situation in relation to that."

Mourinho's only injury concern surrounds Ramires, who the Portuguese believes will be out until after the international break next month.

"It is a muscular injury so he's not to play Tuesday or to play against Arsenal [next Sunday]," he said. "He needs the international two weeks break, he needs that time so maybe he can be back after that."