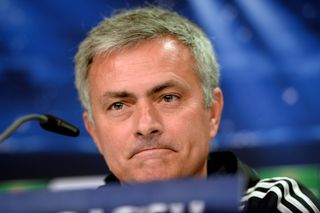 While Arsenal defeated basement boys Crystal Palace 2-0 in Saturday's early kick-off, Chelsea will head to the Emirates Stadium a little over 48 hours after securing a dramatic 2-1 win over Manchester City.

As a result Mourinho feels unable to select a number of his leading stars and suggested the fourth-round match has lost some of its potential lustre, aiming his frustration at those who made the decision for a Tuesday game.

"We are going to give the game that the people that put the game on Tuesday wants," he said.

"If they want Arsenal to win a trophy, that's a help. If they want a big game between two big teams in London they should put the game on Wednesday and not on Tuesday."

Mourinho is expected to select a team featuring first-team squad members who did not start against City, stating that a youth-team game on Saturday morning leaves him wary of lumbering the club's young players with an excessive workload.

"It is not the plan because we have to also respect our fans," he said when asked if he would pick a virtual youth team.

"We have to protect our players. We cannot put our players playing in October two matches in the space of three days.

"I hope they (football authorities) all enjoy. We are going to try to do our job and we will do our job the best we can."