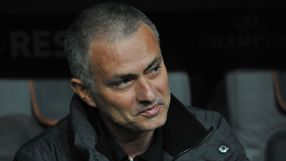 The colourful Portuguese, who again declined to speak to the media after the game, had compatriot Cristiano Ronaldo to thank for netting the 73rd-minute winner on a rain-lashed night in the Catalan capital as Real moved seven points clear in La Liga with four games left.

Club president Florentino Perez hired Mourinho to end Barca's Spanish and European domination and there was a sense after Saturday's result that a shift in the balance of power between the two world powerhouses could be imminent.

Real have to overturn a 2-1 deficit at home to Bayern Munich on Wednesday if they are to reach next month's Champions League final and if holders Barca can get past Chelsea, who beat them 1-0 in London this week, they will face a swaggering Real side filled with new confidence in another mouthwatering 'Clasico'.

The former Porto, Chelsea and Inter Milan manager got his tactics spot on in Saturday's La Liga clash, comprehensively outwitting Pep Guardiola for only the second time in 10 meetings in all competitions since he arrived from Italy two years ago.

Guardiola's decision to start with inexperienced B-team winger Cristian Tello backfired and he waited too long before bringing Cesc Fabregas, Alexis Sanchez and Pedro off the bench.

Mourinho appeared to have learned a lesson from his former club Chelsea, who managed to contain a dominant Barca in much the same way in Wednesday's Champions League semi-final first leg at Stamford Bridge.

After snatching an early lead through Sami Khedira, his battling troops repelled wave after wave of largely toothless Barca attacks and the home side's scrappy equaliser from Sanchez served merely to set the stage for Ronaldo's breathtaking breakaway winner.

World Player of the Year Lionel Messi was kept quiet for a second consecutive game - a worrying scoring drought by his unrivalled standards - as the Real players matched their Chelsea counterparts with expertly-timed tackles, controlled aggression and old-fashioned grit.

Guardiola threw the 20-year-old Tello into his first 'Clasico' and although he showed off his blistering pace on several occasions he wasted one of Barca's best chances by firing wildly over the bar from a good position.

Fabregas replaced him in the 80th minute but had few opportunities to demonstrate the creativity and goal-scoring prowess that prompted Barca to spend 40 million euros to lure him back from Arsenal in the close-season.

Sanchez, who was carrying a knock from Wednesday's Champions League game, looked Barca's most dangerous player when he came on for Xavi and he had only been on the pitch for around a minute when he made it 1-1.

Asked about his formation at his post-match news conference, Guardiola said he did not believe Barca had been outplayed and he had no reason to reproach his team.

"They looked for their chances and we opened up the pitch very well," the former Barca and Spain midfielder said.

"Our team operates in tight spaces and sometimes it's tough," he added.