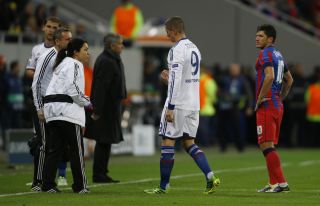 The Stamford Bridge outfit won 4-0 over Steaua Bucharest on Wednesday but Torres' injury took some of the shine away from an otherwise comfortable victory as the Spanish striker had to leave the field in the 11th minute.

Torres had started Chelsea's two previous games before the UEFA Champions League clash in Bucharest and Mourinho was clearly disappointed to lose the Spaniard to injury.

"The bad news is the injury," Mourinho said.

"It's a pity for the guy because, physically, he was in a very good moment.

"He played fantastically against Tottenham and deserved to start this game. So it's a pity but that's football."

Torres' knee was the second piece of bad injury news for Chelsea in less than two weeks after Dutchman Marco van Ginkel tore his anterior cruciate ligament in their English League Cup match against Swindon.

The 20-year-old Dutch midfielder could miss up to nine months of football but Mourinho claimed Torres' injury was less severe.

"The doctor is very confident it is not a big injury like we had with Marco van Ginkel but it's something with his knee, his ligaments and we have to wait for the scans," Mourinho said.

"Fernando knows that he doesn't play against Norwich on Sunday and will not go to join the (Spanish) national team."

Mourinho said he was hoping Torres would return against Cardiff City in just over two weeks.

"He knows that he has 15 days until the next match he can play, against Cardiff," the Portuguese said.