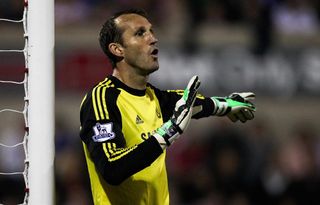 The 41-year-old signed a one-year deal at Chelsea in July last year, as back-up to Petr Cech.

But Schwarzer was thrust into the limelight after Cech dislocated his shoulder in April, and the former – who made 12 appearances in all competitions last term – found himself starting in Chelsea's UEFA Champions League semi-final as a result.

Thibaut Courtois, who has spent the last three years on loan at Atletico Madrid, is expected to return to Chelsea in the close-season, leading to doubts about Schwarzer's future.

But the shot-stopper, who has retired from international football, said Mourinho wants him to stay.

Schwarzer said in Sydney: "I've had messages from the boss, he's very keen for me to re-sign with the club.

"And that's all I really need to know, that he wants to keep me at the club and I'll leave the rest up to the powers-that-be to sort it all out.

"I'm confident it'll be sorted out in the next week or two.

"I still want to stay in Europe as long as possible. If I have the chance to stay at a club like Chelsea, I'd love to do so because it's an unbelievable experience.

"I had opportunities to play in the Champions League semi-final and vie for the (Premier League) title - and that's something invaluable and something I hadn't experienced before. And I wouldn't change anything for it."