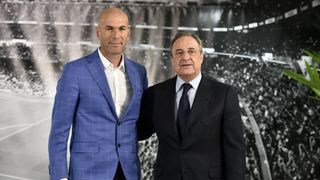 Former Real Madrid president Ramon Calderon believes Jose Mourinho will return to the Santiago Bernabeu if fortunes do not improve under Zinedine Zidane.

Madrid and France legend Zidane was confirmed as Rafael Benitez's successor on Monday after the Spaniard paid the price for a mixed seventh months in charge.

A Clasico hammering at the hands of Barcelona, plus regular reports of dressing room unrest, undermined Benitez's reign, with Zidane seen by Madrid president Florentino Perez as the man to reunite the squad.

"I wish Zidane all the best but it will be difficult. If he is not successful then Jose Mourinho will be on the bench in June, I am sure," he told BBC Radio 5 live.

"It is a great opportunity for Zidane [but] he lacks experience as a coach. That is a problem."

Calderon served as Madrid president between 2006 and 2009 with Vicente Boluda overseeing a brief spell prior to Florentino Perez's reign.

And Calderon was criticial of Perez - suggesting the president had made an error in dismissing Carlo Ancelotti in favour of hiring Benitez in June.

"Florentino Perez is an engineer, he is not a professional," Calderon continued.

"He decided to sack Carlo Ancelotti when everyone loved him. They changed Rafael Benitez but no-one is advising who is the right man to be there.

"Perez didn't say anything about the change. Why? That is the real story about this club.

"I think the players like Zidane. He won everything with Real Madrid. I am sure the fans will receive him in a very good way. What happens in the next weeks, nobody knows."