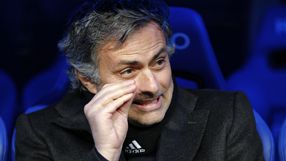 Real, who last took the continental crown in 2002, swept aside bogey team Olympique Lyon 3-0 on Wednesday, progressing 4-1 on aggregate and securing a berth in the Champions League quarter-finals for the first time since 2004.

Portuguese Mourinho, who won Europe's elite club competition with Porto in 2004, arrived in the Spanish capital fresh from leading Inter to an unprecedented treble of Italian league and cup and Champions League and is still in with a chance of repeating the feat with Real.

They go into Friday's draw for the last eight having already qualified for the King's Cup final and are not out of the La Liga title race, with arch rivals Barcelona only five points ahead with 10 matches to play.

It is the Champions League, however, that really matters to Real and construction magnate Perez, who says the competition is part of the club's DNA and who has spent hundreds of millions of euros to realise his dream.

"We have passed a psychological barrier and we can now think realistically about winning the biggest prize," Jorge Valdano, Real director general and Perez's right-hand man, said after the team beat Lyon for the first time in eight attempts in Europe.

"We have a young team which is still developing," the former Real player and coach added.

"It has talent, personality and physical strength. All that justifies hope for the future."

Mourinho said after Wednesday's match he wanted to avoid former clubs Inter and Chelsea in the next round as he finds it a bigger emotional challenge to play against teams to which he maintains strong ties.

His compatriot Cristiano Ronaldo, who became the world's most expensive player when he joined from Manchester United in 2009, is eyeing a match-up with Bundesliga club Schalke 04, who have former Real talisman Raul in their ranks.

The 33-year-old former Spain striker, the leading scorer in European competition, was discarded when Mourinho arrived from Italy but has been in fine form for the German club, netting 11 league goals and three in the Champions League.

"Schalke could be a good team, let's hope so as then Raul would return to his home," Ronaldo told reporters.

"I don't want to play Barca right now because they are the strongest side," he added.

"But it won't matter if we get them because anything can happen in a knockout tie."