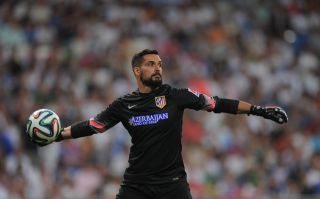 Atletico started the defence of their La Liga title with an uninspiring draw at the Estadio del Rayo Vallecano on Monday, in a match that coach Diego Simeone was forced to watch from the stands as he began his eight-game ban.

Goalkeeper Moya was keen to stress that Atletico's resilience at the back is a plus point to take from the clash.

"I'll take the positive of not conceding a goal and being strong at the back," he told Canal+.

"It's a valuable draw because we started the league away from home. We are an ambitious team that wants to win in all the competitions.

"The team still shows a very good defensive solidity that is ultimately what makes us win.

"In attack, we haven't been the Atletico we all wanted, but [the season] is very long."