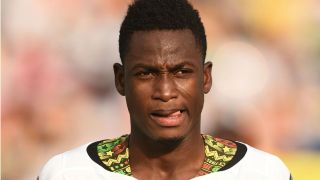 Mozambique checked Ghana's momentum by holding the Group H leaders to a goalless draw in Africa Cup of Nations qualifying on Sunday.

Avram Grant's men came into the fixture in Maputo having won their opening three matches, including a 3-1 victory over the same opponents in Accra on Thursday.

However, Ghana proved unable to pull off a repeat performance, allowing second-placed Mauritius the chance to pull within a point of the summit when they travel to Rwanda on Tuesday.

Black Stars debutant Ebenezer Assifuah came close to opening his international account when he sent the ball just wide early on, and the Sion striker continued to cause problems for Mozambique.

Jonathan Mensah's header crept over with 20 minutes on the clock, before Domingues nodded against the crossbar for hosts Mozambique - the closest either side came to breaking the deadlock.

Goalscoring opportunites were at a premium after the break, with both sides lacking the quality to truly test the goalkeepers.

A promising late Ghana attack broke down following a poor Baba Rahman pass, allowing Mozambique - ranked 100 in the world - to celebrate their first point of the qualifying campaign.