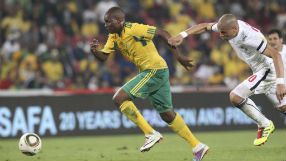 Mphela struck an angled effort past veteran goalkeeper Essam Al Hadari three minutes into added time to give South Africa a second win in Group G and leave Egypt floundering at the bottom with just one point at the halfway stage of the campaign.

South Africa, who have seven points from three games, have opened a six-point gap over the Egyptians, who have won the last three Nations Cups but now find themselves in deep trouble in their bid to qualify for the 2012 finals.

The goal came from only the second shot by South Africa, who were held at bay by a stout Egyptian defence until a through ball from full-back Anele Ngcogca in the 93rd minute put Mphela clear and he shot across the keeper into the corner of the net.

Egypt, although playing defensively, created several half chances in the game and Mohamed Nagui, whose exploits as a substitute helped Egypt to victory in last year's Nations Cup in Angola, somehow put a chance wide from a corner with the goal at his mercy shortly after coming on in the second half.

The teams meet again in Cairo in the next round of qualifiers in the four-team group in June.

The 11 group winners qualify for the finals, to be co-hosted by Equatorial Guinea and Gabon, along with the three best second-placed finishers.