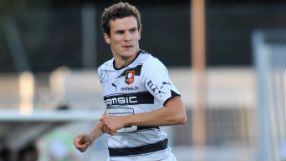 The 24-year-old has not missed a single minute all season and has racked up 2,520 consecutive minutes.

A no-nonsense approach is why the likes of Danze and Rennes coach Frederic Antonetti, an outspoken Corsican who resembles a rugby player rather than a soccer manager, have pushed the unfashionable team to the upper echelons of Ligue 1.

"All the faith we put in Danze at the start of the season has been confirmed," Antonetti told the club website.

"He never drops his performance level. He is a player you can rely on."

Rennes, ninth last term, won five games in a row to surge to second in the table but a 2-0 home defeat by champions Olympique Marseille and a 1-1 draw at fellow title challengers Olympique Lyon last time out meant they have slipped to third.

Surprise leaders Lille are five points above Rennes who will be wary of Auxerre after they pulled off a 2-0 win over Sochaux before the international break to move three points clear of third from bottom Monaco.

Auxerre, a fertile breeding ground in the past for top talent such as Eric Cantona, finished third last term but following a Champions League group exit their season has gone from bad to worse.

Lille continue to confound the doubters who felt they were not sufficiently equipped to stay ahead of the pack and Saturday's home match with mid-table Caen is the perfect chance to tighten their grip on top spot.

Marseille, in second, are four points adrift and travel to Racing Lens on Sunday without suspended centre-back Souleymane Diawara and striker Brandao, who has joined Brazilians Cruzeiro on loan after being investigated over an alleged rape in France.