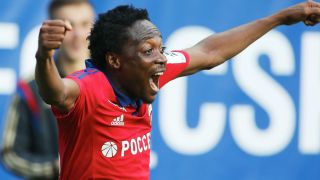 The Premier League champions have reportedly agreed a fee of £16.6million to sign the 23-year-old, who has scored 54 goals in 168 games for CSKA.

Musa's agent Tony Harris told BBC Sport: "Everything has been finalised and Musa will be in England for his medical on Wednesday."

CSKA coach Leonid Slutsky has also confirmed the deal is set to be completed and is confident in Musa's ability to adapt to the English game.

"He'll be leaving Tuesday," Slutsky told Russian media. "And if you look at the way things are done over there you'll see he is a player just made for English football."

Musa has won three Russian Premier League titles and a Russian Cup in his time at CSKA. He was also part of the Nigeria squad that triumphed in the 2013 Africa Cup of Nations.

He is set to become the fourth player to join Leicester in the transfer window, with centre-back Luis Hernandez, goalkeeper Ron-Robert Zieler and midfielder Nampalys Mendy having signed for Claudio Ranieri's men.