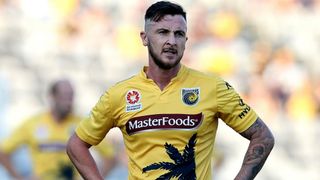 The Irishman received only a yellow card after he headbutted Muscat in the 59th minute of the Mariners' 3-1 win over the Phoenix in the A-League.

The two clashed just moments earlier, with Muscat sending an elbow in the striker's direction, before O'Donovan retaliated.

However, O'Donovan has claimed Muscat milked the incident, saying the Phoenix defender deserves an Oscar.

"He's gone down like a movie star there. He'll get an Oscar for that, he timed it perfect," O'Donovan told Fox Sports.

"I've got elbowed in the face - not once, not twice - and the referee hasn't seen fit to react to that or book Manny Muscat.

"So I walked away and I had a player run into my direction, jeering at me ... I lean my head in and I've reacted to it.

"The referee could have quite easily sent me off - I'm fully aware of that. But he dealt with it sensibly, he felt there wasn't enough force behind what I did. I got yellow-carded and nobody got hurt.

"Manny played on the rest of the game, he didn't have a scratch or a bruise, we shook hands after the game and he said 'good battles' and so did I. I'm the only one who has any wounds from the whole event."

Despite playing down the incident, O'Donovan did issue an apology to Mariners supporters.

"I know there's going to be backlash, I know in this country it's a small football community for such a big country and there's a lot of media coverage," he said.

"It's only human nature when there's so much media furore about it, there's going to be a backlash.

"I wanted to apologise to Central Coast fans and members for what they saw last night. I apologise first and foremost for taking the gloss of what was a terrific win for the team last night."

Phoenix coach Ernie Merrick blasted the headbutt from O'Donovan after the game, labelling it as "disgraceful" and "vicious".

"It was a disgraceful act, coming in from the side - Manny was unsighted - with a vicious headbutt with malice and he didn't do it properly so he's the one who finished up with the shiner," Merrick said.

"If the game allows anything like that to occur then we're definitely going into the dark ages of football."