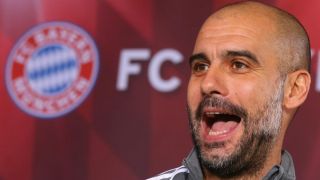 Yaya Toure's agent Dimitri Seluk has hit out at departing Bayern Munich coach and former Barcelona boss Pep Guardiola, claiming even his own grandfather would win the Bundesliga and La Liga.

Guardiola will leave Bayern at the end of the season, with the Spaniard having already agreed to replace Manuel Pellegrini at Manchester City in 2016-17 according to widespread reports.

The 44-year-old, who guided Barca to three La Liga titles and two Champions League crows prior to arriving in Bavaria in 2013, is poised to leave Germany as a three-time Bundesliga winner, with Bayern eight points clear atop the summit.

But Seluk has questioned Guardiola's managerial ability after he sold Toure to City in 2010 when he was in charge at Camp Nou, instead heaping praise on former manager Roberto Mancini.

"Pep is a great coach. But he has won the title at Barcelona and Bayern Munich," Seluk told The Mirror.

"The truth is that my grandfather would win the title with Barcelona and Bayern Munich because they are big clubs with great players.

"Look at Luis Enrique now. Last season he won the title and the Champions League with Barcelona.

"I'm not saying he isn't a good coach, but look what he did at Roma. Nothing.

"I'd like to see Pep take a club that is eighth or ninth and make them champions.

"That's why Roberto Mancini was the best manager City have had.

"Manuel Pellegrini is also a good coach who deserves credit, but Mancini built the team. He took a team that was nowhere and made them champions."