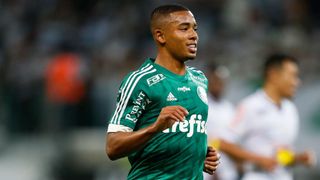 Gabriel Jesus has revealed he plans to remain with Palmeiras for the rest of the Brazilian season, despite attracting interest from a plethora of Europe's biggest clubs.

The 19-year-old forward is one of the most sought-after talents in world football, with Barcelona, Inter and Real Madrid among the long list of teams linked with the player.

He has been in outstanding form for Palmeiras in domestic action, including scoring six goals in his side's last four games, but is in no rush to leave his homeland.

"My future is decided. My intention is to stay at Palmeiras," Gabriel Jesus told SporTV.

"I have confidence in our work and in that of Cuca, the coach.

"Right now the team is very strong, and then I want to stay here, where I am happy and I am fighting for the title."

The Serie A fixture list in Brazil runs through to the start of December, suggesting a January move is more likely for the teenager.

Gabriel Jesus will also get the chance to impress on a global level at the Olympics in August, as he has been selected in a squad that includes Barca forward Neymar.